No products in the basket.
£0.00 Basket
Menu
Contact us
We're waiting to hear from you

At The Husbandry School you will be made very welcome, and we shall always endeavour to pass on to you as much as is possible of what we have learnt here at Liddy Ball, given the time available.

Please feel free to email us with any questions you have regarding our courses and programmes.

Carole and Jonty Williams at:

Unfortunately the Liddy Ball site has limited access for people in wheelchairs.

Please note that the terrain is hilly, steep and uneven in places – not all flat grass and paths! Please contact us to discuss in further detail.

Hopefully by next year we will be able to offer accommodation here at Liddy Ball for course participants and volunteers, but for this year it is most likely that we won’t be able to. However, there’s quite a range of local hotels, B&Bs and campsites nearby which hopefully will suit your needs.

We recommend you check the local Ashburton website as a good source of information – www.ashburton.org 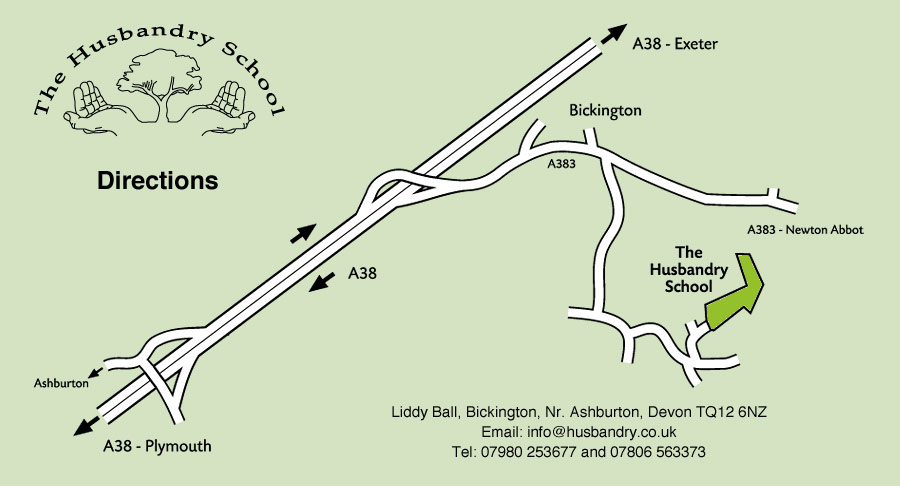 South Devon is well served by the A38 Expressway, and the Husbandry School is a few minutes drive on country lanes just off the A383 exit to Newton Abbot.

However… because there is only an exit on the northbound side of the A38 (dual-carriageway), if you are coming from the Exeter direction you will need to over-shoot slightly and take the first exit to Ashburton, go over the flyover, and then turn back onto the A38 as if returning to Exeter. The next exit signed to Newton Abbot (A383) is the one to take. Once on the A383, and you’ve gone past the first turning to Bickington on your left, you need to take the first right, sign-posted to Gale.

This is where most sat-navs start to let you down.

Therefore we strongly recommend you print this page so you can have the map in front of you as you widdle around the lanes having left the A383.

Yes, there are other minor roads that lead to us from the Newton Abbot direction, or backroads from Ashburton, but these are best avoided – please stick to the route indicated on the map.

The last part of your journey is on an unsurfaced track – keep an eye out for our “Liddy Ball” sign-post at the start of this lane.

We are keen to encourage people who choose to use public transport as it all helps the environment that little bit, and therefore we can usually meet you from nearby bus-stops or arrange pick-up and drop-off times at Newton Abbot railway station.

The X38 bus provides a reliable, fast and reasonably regular service between Exeter and Plymouth, stopping at Ashburton.

There is also the 88 bus service from Newton Abbot to Ashburton, Buckfastleigh, Totnes and Paignton which runs in both directions (hourly service, Mon-Sat) which has a stop on the A383 just at the bottom of the hill from us.

Newton Abbot railway station is well served by trains on the national rail network, with many direct services from London as well as up country all the way to Scotland.

Don’t forget, we’re here to help and will do what we can to make your journey, and finding us, as easy as possible!